Budget Bytes is a great little site I like to use to aid in my cooking. It’s actually the only one I use. I like it because she breaks things down, uses pictures, and it looks like she has a sweet haircut.

I’ve made these twice baked potatoes a few times before, so you would think this time it would be smooth sailing.

Only after reading the directions do I have a few problems:

1. Sour cream, gross. How about a little milk instead? Joe said they were a little dry the last time when I didn’t use sour cream. But I don’t mind, because my taste buds are boring, remember?

4. You are to put the potatoes right onto the oven rack. This scares me. The oven is hot. I don’t want to touch the potatoes with the oven mit either – who knows what has been on that oven mit.

5. Twice baked potatoes. Keyword here, twice. I have to cook these shits, TWICE!? This boggles my mind. The first time around is long enough. An hour, really? Isn’t it okay to eat the potato “raw”? Why do you have to cook it for so long then? Not only that, but then I have to put it BACK into the oven for another 20 minutes? I have to do this after I have mixed in the broccoli and cheese – you know, when the mixture is good and yummy and you just want to eat it.

It felt like when you make cookies or a cake, and you just want to lick the bowl. But you’re not supposed to because apparently you will get sick. I just wanted to eat the potato mixture right then and there! (I totally had a few bites)

While mixing, I totally mixed it onto the counter and onto the floor. CASUALTY CHEESE, RESCUE IT!

To solve the sour creme issue, Joe starts pouring some milk in. I am so nervous that it’s going to be much. Us cats that can’t cook are no good at eyeballing shit.

In the end, they turned out pretty scrumptious and it was plenty of food to last us a few days, which I always like.

Thanks, budget bytes lady, and your sweet haircut. 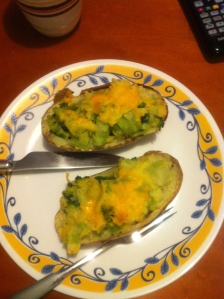 This weekend I may go with my friends in Dou Loux to paint some pottery! I feel like this is going to be a huge disaster, thus making you all laugh at me in a later post. But I would like to introduce you to Dou Loux…

Dou Loux consists of my very best friend, Melanie, and her fiancee, Byron. These 2 are such a power team. Anything that is creative that you can think of – they can do. Crafty, hair styling, drawing, cooking, graphic designey, webby sites, all of it and more. Champions I tell you, champions!

You must check out the current stuffs they have for sale. And now I will bombard you with all of their internet lands:

I don’t really know what else to say except for, amazing. And you’d be an idiot to not buy something.

(No picture of a cat today, but if you check out Dou Loux, I am sure you will see a cat sticking its tongue out)

Breakfast, potatoes, Joe Red, and Jackie – 4 of my favorite things.

We picked up these adorable little potatoes from Trader Joes and I said – these would be perfect for breakfast, let’s fry ’em up! Then I thought, what does that even mean? I have no clue how to “fry ’em up”.

My friend Jackie just got engaged and I believe that Roo proposed to her simply because she has been making him delicious meals for 10 years. (kidding, dudes). So I decided that I needed to enlist her help while I “fried up” these adorable little potatoes. While I’m texting her one Saturday morning about my potatoes, she tells me she is doing the exact same thing… only she’s also got crazy breakfast sandwiches going on. (Geeze, I am not up to par with this one. How will I ever get a husband!)

I take these potatoes, cut them in half (hey, they’re already small, I shouldn’t have to do much cutting!) throw ’em in the frying pan, add some salt and pepper and push those little fuckers around town with my manly ass spatula. Some of them are turning brown, some of them are not. The interwebz said about 20 minutes…but hell this has only taken me about 10! I try to cut one in half with a SPOON and it doesn’t work so I’m like shit these can’t be done, but they’re brown?! (Apparently you shouldn’t be able to cut them with a spoon like I thought…my brain was in mashed potato land, wrong potato land!) 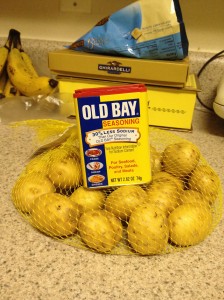 When they’re just about done, I take one to Joe who is still in bed. “Hey babe, I brought you a potato in bed”…

Then we enjoyed our potatoes…oh and eggs too.

The following Saturday, it is potato breakfast take 2. This time Joe has purchased some hash browns in a bag, the frozen type. I let him handle this one, I stood back, and this is what I overheard…

“Can you Google the combustion of olive oil?”

I don’t know what happened in that kitchen. All I know is that it tasted damn good.

I guess we will count these potato adventures as mediocre successes and not complete failures!

Lessons learned: Cut potatoes smaller. Olive oil will not set the kitchen on fire. Frozen bag of hash browns are delicious. My meals are not delicious enough to get a husband. Learn from Jackie. 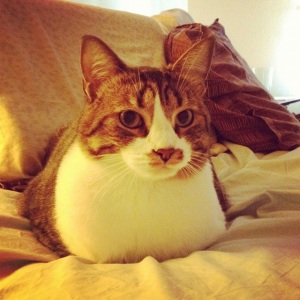 In this day and age, the Internet (did you know you’re supposed to capitalize the I in Internet? crazy!) can be such a great place. You can find just about anything, why ask people questions when you can just Google it? But, the Internet always fails me in my cooking adventures. That was another option for the title of this blog – The Internet Failed Me dot com.

Let me tell you how the internet failed me in making French Toast.

1. This is the first problem I saw: Dip the bread slices into the mixture you’ve made in the bowl

I understand that people have been making french toast for a bajillion years now by dipping the bread into the bowl, but why did no one notice that bread is SQUARE and a bowl is ROUND?! This boggles my mind. It’s like that game you played when you were little with the wood blocks, trying to fit the right shapes into the right holes. You would bang and bang the circle onto the octagon shape swearing that it should work! But even a child wouldn’t make this mistake, a square into a circle, really?! This idea is SO flawed.

How I messed it up (because a square doesn’t fit into a circle) – The first part of the bread that gets dipped in is super soggy, I flip it over and that side gets covered with the mixture at just the right amount. So I think “Yes! I did it!” Nope, what about the middle of the bread that didn’t even touch the mixture because it’s a damn bowl and this is a damn piece of bread! Another mishap was that the bread got so soggy on the one side, that it just fell apart! (It also doesn’t help that I’m using Target brand bread…)

2. Second problem: Fry the soaked bread on one side until golden brown, then turn and fry other side until browned. Or use a nonstick pan, or add the butter in a frying pan ordinary, to avoid the French toast stick to the pan.

There is so many things wrong with this piece of direction.

a.) I can’t see the side that is face down, so how do I know when it is golden brown? This step was the SAME on every website I looked at, no one wanted to give a time limit. Not even a ball park estimate. Really people?

b.) If I use a nonstick pan, do I still use butter? And wtf does “ordinary” mean in this sentence? I blame the brits. Well, I used the nonstick pan AND butter and guess what people? It was still sticking.

3. What about the temperature on the stove? Low heat? Medium? High? Come on people, details!

How I messed it up – Each piece was cooked differently. Mostly wasn’t cooked long enough, fell apart, stuck to the pan… I tried different heats on the stove, didn’t change much. In the end it tasted like toast with a dash of cinnamon. Some spots tasted like straight up egg and I was worried I was going to die of the plague.

Really, Internet? Help a girl out!

You know what is a way better idea then making French Toast? Going to Denny’s and getting a bangin’ breakfast for $5.99. Although my cat did not enjoy this sausage:

In the second grade, I met Tisha. We have both made it to be a quarter of a century old together, bravo! In the fourth grade, we decided we shouldn’t be partners together for school projects. This is because of my lack of craftiness. She learned quickly to not let me cut anything or it wouldn’t be straight, to not let me attempt to draw straight lines (even with a ruler), to not let me paste anything or you would see the glue or tape seeping out from behind the object, and so on. Thank jeebus she learned this about me early on, otherwise I don’t think we would have made it to a quarter of a century old together.

The moral of the story is, I’m not allowed to do anything crafty alone. Some sort of disaster always happens. The irony here, and not the Alanis Morrisette kind of irony, is that I went to design school. How did I make it through 4 years of art school being crafty-capped? It’s a good thing I took a liking to coding instead of designing. (Thanks, Mark!)

This same rule applies to cooking. Now that I’ve been out in the real world away from my easy-mac making college student friends, everyone is so creative with their food. I thought, hey with the use of the Internet, I could be creative too! Yeah, no, the Internet fails me every time. Although I never even mastered how to make easy-mac so maybe I shouldn’t be trying harder things.

A project of mine never starts without calling my mom first and never ends without my boyfriend, Joe, walking in on the wack-ass final result. I feel sorry for them. Lucky Tisha, she never had to live with me.

During the project is the best part though. My cat, Bull Dozer (Dozey for short), is always there for me along the way to step all over the pieces of my project. Or waits to try a bite of whatever I made. She is the real champion in this process of mine.

(Screw everything I just said, this blog is to make Dozey famous, somehow, someway!)

If you’re into laughing at disasters, fowl language, and cats – then stick around!